2016 wrapped up for the data center Big 6 public providers (EQIX, DLR, CONE, DFT, QTS and COR) with stable to modestly improving price dynamics, and a supply/demand balance in most markets.

While pricing has been stable for the last few years, it is the industry’s continued commitment to underwriting deals based on sustaining ROIC and investor returns in the face of increasing competition that maintains price stability.

Following are metrics and excerpts from 2016 FYE earnings calls and presentations from the Big 6 public data center providers. The data for the most part supports stability in both price and supply/demand balance dynamics. 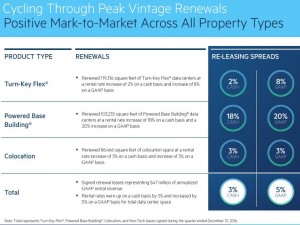 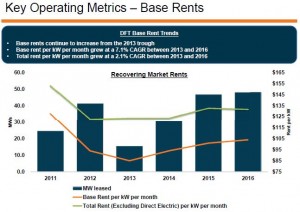 Rational Behavior: A new evolving theme is the recognition that irrational pricing and supply decisions erode market stability for all participants. Bill Stein (DLR CEO) first mentioned rational peer behavior during his Q3 2016 earnings call. In Q4 2016 earnings calls Stein mentioned it again along with Chris Eldredge (DFT CEO) and Dan Bennewitz (QTS COO). The commentary is important as it refers to the maturing nature of the data industry as a whole, and the commitment amongst providers to maintain the integrity of the value of these long-term fixed assets which they deserve.